The one whom Thakur Sri Ramakrishna called ‘Ma’,the one for whom without giving water,he would not take anything in his mouth:That same image of Ma Bhavatarini was made by the sculptor Nabin Bhaskar of Dainhat at Katwa . At the wish of Rani Rashmoni in 1855 he made the image of Bhavatarini Kali. For the time of a month he went to Kolkata,subsisted on haviShyAnna,followed AchAra and when he finished the work(of sculpting),then the image was not proportionate to the garbhagriha. She then ordered him to make another mUrti of Ma Bhavatarini again and told him to make that mUrti larger than the previous one.

Nabin Bhaskar made two images of Bhavatarini Kali. One is in Dakshineshwar and another in some house in Goa Bagan at Kolkata. His family claims that Rani Rashmoni donated an image to someone she knew. Nabin Bhaskar’s fame was such that the Rajas in Bengal presidency came to to Dainhat. Nabin Bhaskar got his raw material from Bihar. For procuring ‘kosthi pathor'(black stone) he purchased a hill in Jamalpur. At Nabin’s good fame,apart from the Burdwan Royal family,he was also commisioned by the royal families of Cossimbazar,Natore,Puntia,Rangpur,Dinajpur,Jemo,Muktagacha,Mymensingh,Manipur,Lalgarh to sculpt their grihadevatas. It is said that the Maharani of Dinajpur was so spellbound at Nabin Bhaskar’s skill that she gifted him a golden chisel.

Bhaskar took his craft to new heights on his sculpting the image of Dakshineshwar. His best creation is the creation of the murti of Yogadya at Kshirgram. Even today in his house broken images can be found that are in a state of neglect. Still,a very beautiful 10 inch idol of Kali has been closely kept in his successor Nimai Bhaskar’s possession. Along with this Kali Murti  he keeps a dazzling statue of ‘shwet pathor’. This is the last creation of Nabin. Today his workshop is broken and filled with weeds,and the naach-mahal is also dilapidated .His  ancestral dwelling has but one room, even it is mired in household disputes. This generation has but forgetten such a fabulous sculptor.

Nabin Bhaskar’s house is now in a state of decay,swallowed up by time. His descendants no longer carry the illustrious legacy of his sculpting. His left over creations are also slowly going to ruin, due to lack of care.  Due to the lack of anyone to look after that place,that family house at Dainhat is now like a dump. Some valuable works of that sculptor are still in that house.

The one that is ‘popularly recited’ in many places runs

The source of this in the Bṛhat Tantrasāra(hence called BTS in short) is the Kālītantra…and although this is popularly recited and some people say that Āgāmavāgiśa composed this dhyāna,I have hardly seen Kālī mūrtis that conform to the above lakṣaṇas.

In fact,the Kālī mūrtis I’ve seen in houses and temples conform much closer to the dhyānas laid down below(also from BTS)

This is from the Siddheśvara tantra. This dhyāna can be followed alone by those who have recieved initiation in Kālī’s single-syllabled vidyā. 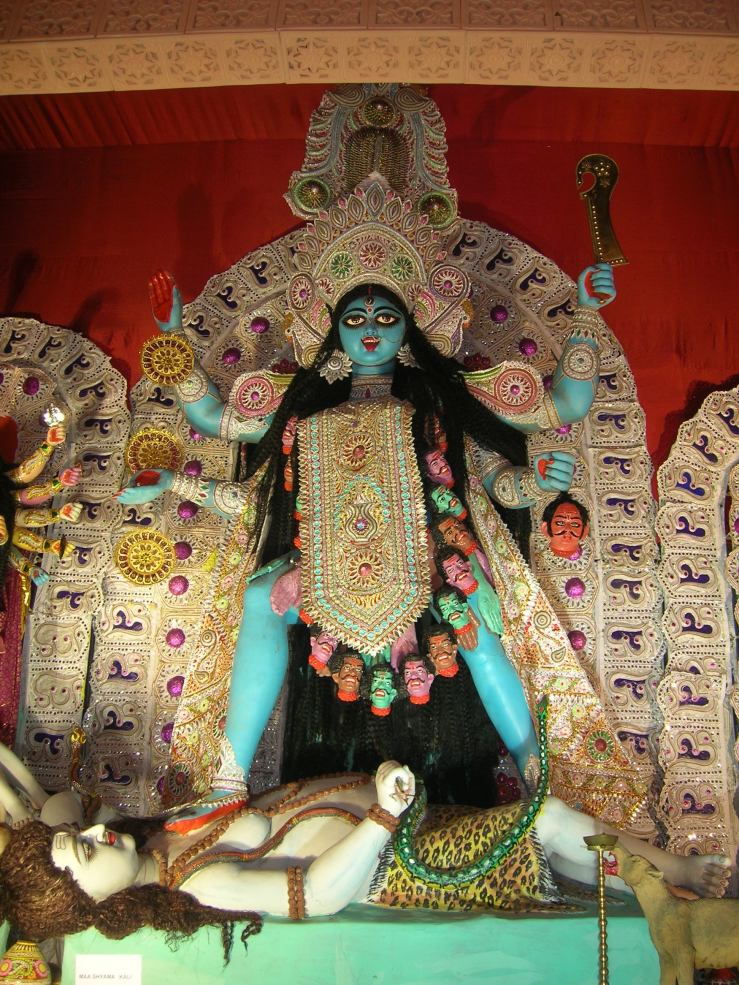 This is from the Kālīhṛdaya.

If one is saying that Āgāmavāgiśa ‘popularized’ Kālī,it is this dhyāna that matches. Caveat:Not do raise doubts on the siddha,but I am unaware if Kālīhṛdaya is his own work or not.

It is often said that he said ‘joto mot toto poth'(As many faiths, so many paths). However,from reading Sri Ramakrishna Kathamrita,one of the earliest unbiased records on his life,we find a more nuanced picture than the uncritical universalism a lot of people(secularists of Bengal,Ramakrishna mission monks themselves,etc).

He also says next after that

It’s like going to the Kali temple on different roads. Even so, some paths are pure, while others are dirty. One must take a pure path.cvama

So such paths would squarely fall in the domain of ‘impure’ paths,and by Ramakrishna’s standard,to be avoided for sAdhakas. Even in the domains of Astika sAdhanA,Ramakrishna himself was deprecatory of practices involving miThuna(though he did vAmAchAra sAdhana on a pa~nchamuNDi Asana). He again says

Narendra refers to the Tantrik sects of Ghoshpara, Panchanami and others. Thakur describes their practices and condemns them. He says, “They can’t follow spiritual practices correctly. They just satisfy sensual desires in the name of religion.”

….looking on a woman as one’s mistress, the attitude of a ‘hero,’ is beset with difficulties. Tarak’s father used to practice this rite. It is a very difficult path. It is impossible to maintain the correct spirit in this path.

Many of these people conduct themselves according to the Radha Tantra. They practise spiritual disciplines with the five basic elements – earth, water, fire, air, and ether – through the use of excrement, urine, menstrual flow, and semen. It is a very dirty practice, like entering a home through the toilet.

…when you come across a wicked person, salute him from a distance. Chaitanya Deva did the same thing. He would restrain his spiritual feelings in the presence of those of a different nature. At Srivas’s home, he forced Srivas’s mother-in-law out of the room, dragging her by the hair.

Note the use of physical force to evict those averse to devotion.

His preferred path as noted elsehwere in the Kathamrita

The path of devotion enjoined by Narada is best suited to this age.

And he truly was an embodiment of that mArga. As seen from quotes like

It(Kashi) brings liberation[10], dear. But I don’t want liberation, I want only love and devotion for God

I have seen so many faiths, so many paths. Now I don’t like them anymore – they just argue with each other.

This corresponds well with the sutras vAdo nAvalambayaH| and bAhulyAvakAshatvAdaniyatvAt| of the nArada bhakti sutras(The sAdhaka should not take to disputation,for it leads to endless arguments and no certain conclusion).

This book contains beautiful stories of devotees. But the book is dogmatic. It runs down other beliefs.

Is someone who condemns even the mild sectarianism of the bhaktamAla is going to accept the sectarianism inherent in the Mosaic counter-religions exemplified by Islam,etc?

One holy book of the Vaishnavas is the Bhaktamala. It is a beautiful book. It contains nothing but stories about devotees. But it is one-sided. It goes so far in one place as to make the Divine Mother[5] adopt a Vishnu mantra.

“I think you can find such things in the Srimad Bhagavata also. Such as that without a Krishna mantra it is as difficult to cross the ocean of the world as it is to try to cross a mighty ocean by holding a dog’s tail. All sects talk highly of their own sects alone.

“Shaktas also try to disparage Vaishnavas when they say, ‘Sri Krishna is the pilot of the river of the world; he alone can take one across.’ To this Shaktas reply, ‘Of course this is true. Will the supreme Mother, empress of the universe,[6] row one across Herself? She has engaged this Krishna to do the job.’” (All laugh.)

“What arrogance people show because of their beliefs! There are weavers in my village and in Shyambazar and other places, most of them Vaishnavas. They talk very big. They say, ‘Which Vishnu do they worship? The Vishnu who preserves! We don’t touch him.’ Or ‘Which Shiva? We accept Atmarama Shiva, the Atmarameshwar Shiva.’ One of them says, ‘Tell me which Hari you worship.’ Thereupon another says, ‘No, why should we? Let someone else answer.’ They work at weaving and talk so big.”

“Rati’s mother – the attendant of Rani Katyayani, a member of Vaishnavcharan’s group – was a bigoted Vaishnava. She used to visit here frequently. Her devotion for God was unusual. But as soon as she saw me eating Mother Kali’s prasad she ran away.

“He alone is a real person who has harmonized. Most people are single-minded. But I see all these as one. Shaktas, Vaishnavas, and Vedantists worship the same one Reality. He who is formless also has forms. All are only His different forms.

Brahman without attributes is my father, and God with form is my mother.

His references to harmony were usually of this nature. Scarcely between even Bauddha upAsanA,let alone hostile counter-religions which seek to uproot our traditions. It points to an immense loss of common sense when Ramakrishna’s remarks are extended beyond their intent(ativyApti-dosha).

As for the alleged practice of Islam and Christianity,I have found no mention of any Christ-centred sAdhanA,and he only repeated Islamic mantras for a few days given by a certain Govind Rai. It’s extremely unseemly to ignore his central legacy(of that of a nAradIya style bhakta to devI bhava-tAriNI,disparaging vAma and other impure paths) and instead paint him as someone who was lacking in discrimination. Shri Ram Swarup deals with this issue better than I could in his book on this affair.